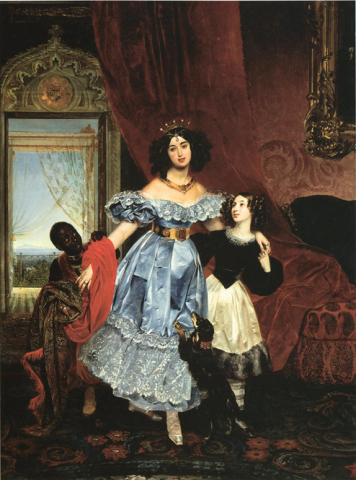 Dr. Allison Leigh (Assistant Professor of Art History, Department of Visual Arts) had three essays accepted for publication over the summer. The first, entitled “Blood, Skin, and Paint: Karl Briullov in 1832” will appear in the forthcoming volume New Narratives of Russian and East European Art: Between Traditions and Revolutions and will be published by Routledge in May 2019. The second essay, “Social Media in the Art History Classroom,” was co-authored with Lauren Jimerson and will appear in the Routledge Companion to Digital Humanities and Art History. The third article explores the unique reception of Kazimir Malevich’s White on White in America and will appear in a forthcoming issue of the journal American Communist History.

Dr. Leigh also submitted a new essay, entitled “Cultural Bilingualism in Eighteenth-Century Russian Portraiture” for the forthcoming volume Civic Values, Involvement and Expression in the Eighteenth Century: Literature, the City, and Space. In May, Dr. Leigh's review of The Europeanized Elite in Russia, 1762–1825: Public Role and Subjective Self also appeared in H-Net Scholarly Reviews.

Dr. Leigh will be presenting at the international conference Theorizing the Geography of East-Central European Art at the Piotr Piotrowski Center for Research on East-Central European Art in Poznań, Poland in October. Her research paper, “An Experiment in Horizontal Art History: Critiquing Modernist Geographies,” grew from a course she taught at UL in the Fall of 2016.