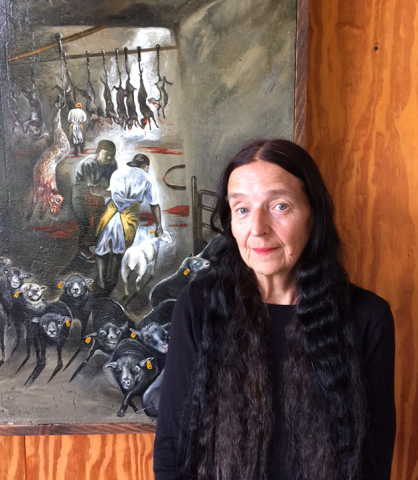 The Department of Visual Arts Marais Press will hosting international printmaker Sue Coe on October 4-10th. While at Marais Press Coe will be working with Professor Brian Kelly and printmaking students in the production of 2 printed editions, she will present a public lecture on her personal work, and spend time with students in the Department of Visual Arts.

Coe is an English artist and illustrator working primarily in printmaking, drawing, and in the form of illustrated books and comics.  Coe studied at the Royal College of Art in London and lived in New York City from 1972 to 2001 and currently lives in upstate New York.

Coe is known for her intensely political sensibility and her work often explicitly makes animal rights and other social issues its central subject. The artist uses painting, printmaking, and a realistic drawing style to depict scenes of animal suffering, as seen in BP Burns Turtles. Her work is notably influenced by Chaïm Soutine, Käthe Kollwitz, and Francisco de Goya, among others. Along with her investigation of cruelty against animals, Coe has also explored topics such as sweatshops, prisons, AIDS, war, and anticapitalism throughout her work. Her illustrations have appeared in a wide variety of publications, including The New York Times, The New Yorker, and The Nation. She lives and works in upstate New York.