Scott Finch lives and works in Baton Rouge, Louisiana, where he directs the Percent for Art program for the Louisian

Andy Loewy Retrospective on display through October in the Dean's Gallery

The School of Architecture and Design is hosting Highlights: A Retrospective, a gallery exhibition showcasing Profes

"Twenty Years of Marais Press: Imprinting a Campus and Collection" Exhibition at the Hilliard Art Museum through August 2022 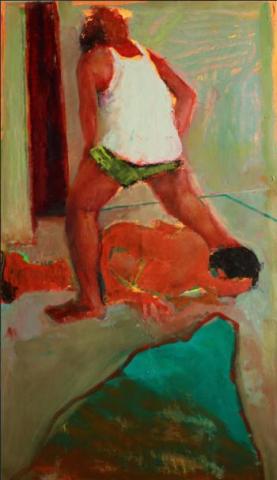 "Theaters In The Sky: A solo Exhibition by Hagit Barkai," was on display Sep. 4–24 at the Greensboro Project Space in Greensboro, North Carolina. The exhibition was inspired by the idea of a detached theatre, hovering over a disturbed land occupied by ghosts on the ground. This project was an invitation to use this metaphor of performative commentary as a model to reflect on the evolution of facts, stories and myth.

Hagit Barkai and Clare Cook (Basin Arts, Lafayette, LA) continuated their exploration in the the prime and primal states of being in August and September in an exhibition entitled, "The Panic Of Fixing Things (and the horror of acceptance)." In this collaboration, they overlay paintings with a gesturing figure that represents the many characters that can exist in one during different stages in life. These artists use the communication between the painted and projected figure to analyze one’s continuously-shifting states of existence from prime to primal, from disconnection to affirmation, and from panic to a return to the self.

Barkai's painting "Access 1" will be on display through October 10 as part of the exhibition "Louisiana Contemporary 2021," presented by the Helis Foundation at the Ogden Museum of Southern Art, New Orleans, Louisiana. This year’s guest juror, Hallie Ringle, Hugh Kaul Curator of Contemporary Art at the Birmingham Museum of Art, selected 51 works by 39 artists.