Dan Burkett of the School of Architecture and Design and Jeffrey

"Twenty Years of Marais Press" is a retrospective of the creative output of visiting artists’s printmaking collaborations within the Marais Press. Located in the Department of the Visual Arts here on the Campus of the University of Louisiana at Lafayette, the press has been led by Professor, Brian Kelly since 1999.  During that time, Kelly and visiting artists have mentored students as they created hand pulled print editions.

The exhibition opened on September 11th and will close on August 20th, 2022. 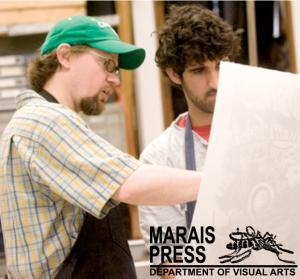 The Marais Press is a service-learning program of the Department of Visual Arts here on the campus of the University of Louisiana at Lafayette. Over the last twenty years, professor, artist, and master printmaker Brian Kelly has invited artists to create fine art print editions of their work in collaboration with his students. In this environment, students are exposed to the creative processes of established artists. They also have the opportunity to advance their knowledge of highly technical printmaking processes associated with lithography, intaglio, silkscreen, and relief printing. This exhibition, featuring art donated by the Marais Press to the Hilliard Art Museum’s permanent collection, is the result of over 260 such collaborations between students and artists since 1999.

Collaboration and service to others is important to printmaking as an art form because the practice requires a great deal of equipment and a team of people to finish a print edition. This willingness to work together and share ideas inspired the creation of the UL Print Club, a student-run organization emphasizing educational demonstrations and partnerships with organizations like the Baton Rouge Arts Council, Community Foundation of Acadiana, and Baton Rouge Children’s Advocacy Center. The annual faculty-led symposium, This Print Thing We Are Doing: An Undergraduate Symposium, is another example of how the spirit of the Marais Press helped create a collaborative educational community.  Each year the symposium is hosted by a different university art department in Louisiana. These activities represent the influence the Marais Press has within the print community and across institutions.

The Hilliard Art Museum has benefited from the Marais Press’s collegial nature in the form of hundreds of donations of fine art prints to our permanent collection. This generosity, as well as the press’s educational mission, is the guiding principle for this exhibition. The Hilliard’s relationship with the printmaking community has grown as a result of Twenty Years of Marais Press. For example, the museum Staff has worked with current students and alumni on many facets of this exhibition and introduced them to aspects of museology including research, exhibition design, framing and mounting, copy editing, and more. This collaborative and mentoring approach mirrors that of the Marais Press, helping to prepare students for a career in the arts. 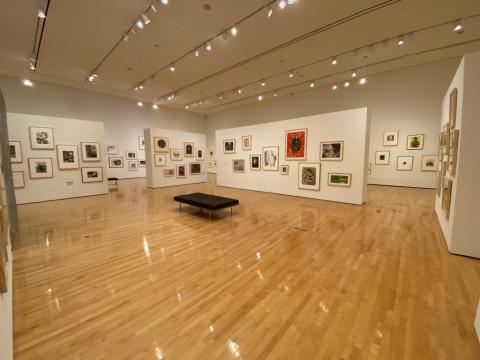 The exhibition also opens a conversation with our campus community about how the history of art is written and maintained. Normally, professional historians evaluate art and artists based on their skill, reputation, and the evaluator’s taste or knowledge. Because of this, it is difficult for many artists’ work to be admitted into museum permanent collections. The Hilliard’s acquisition process for the Marais Press Collection is quite different because Brian Kelly, an artist and the head of the Marais Press, oversees the creation and acquisition of individual works of art. Kelly is directed less by a sense of history or an artist’s reputation, and more by his connection to a community of artists. He has many reciprocal relationships with other university printing presses across the country, making the Hilliard’s Marais Press Collection more about documenting a broad community of printmakers than about forming a collection based on restrictive criteria or connoisseurship. In an era where museums are being criticized as elitist ivory towers, this is a model worthy of consideration for its openness and inclusivity.

This exhibition is presented in largely chronological order beginning to the left of the gallery entrance. Label information for individual artworks and artist biographies are available via QR codes that can be scanned with mobile phones or found in spiral bound booklets throughout the gallery.

In 1991 Adjunct Instructor Mary McBride worked with faculty in the Department of the Visual Arts to bring the study of lithography to campus. McBride, who earned her BFA here at the University of Louisiana at Lafayette and her MFA at the University of New Mexico had advanced knowledge of lithography. She acquired her expertise working in graduate school studying under Lecturer John Sommers and Technical Director of the Tamarind Institute of Lithography, Professor Jane Abrams (1975-83). Professor Clinton Adams, Director of the Tamarind Institute of Lithography (1970-85), a co-writer of Tamarind Techniques for Fine Art Lithography with Garo Antreasian also served as a mentor to McBride. The auspicious beginning of her career set the tone for printmaking at the Marais Press by normalizing the idea of seeking out artists from across the country to share their expertise.

With the support of then Department Head Tom Ladousa as well as renowned artist and printmaker Tom Secrest, the Alumni Association agreed to provide seed money on the condition that sales of prints would be used to offset costs and fund student scholarships. Dean Gordon Brooks and Professor Allan Jones were also early supporters of what became known as the Marais Press. Jones’ knowledge of lithography was viewed as a crucial additional resource for helping introduce students to the technical aspects of lithography.

Before the first print could be pulled, the press needed a name and inspiration was found in Professor John Hathorn’s then recent visit to the fashionable Marais district of Paris. Dutch Kepler, professor and graphic designer, knew that marais translated to swamp or marsh and the name would be a natural fit for a printing press based in Louisiana’s bayou country. The chop or logo (similar to a piece of type used by typesetters on letterpresses) for the Marais Press - a mosquito - was also Kepler’s brainchild, but it is unclear whether he or students designed the now iconic mark found on most Marais Press projects. 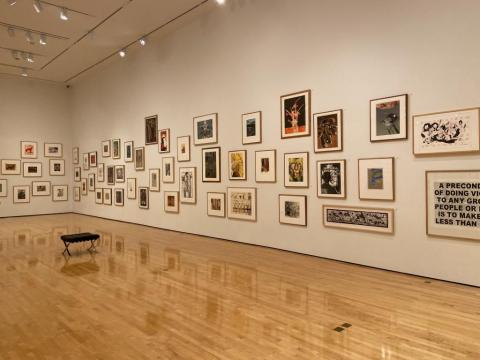 The first two editions Mary McBride undertook were with Elemore Morgan Jr., the prominent Louisiana painter and then faculty member. Morgan loved the process of learning lithography. The scale of Morgan’s experimentation resulted in a popular exhibition of unfinished states of the two 1992 editions on view in 20 Years of Marais Press. Alumna Paula Stude was indispensable as she helped complete both of Morgan’s editions with McBride. The last edition created in 1994 before McBride moved on was by John Buck who came to campus at the invitation of faculty member Tom Secrest. In McBride’s absence, the press was inactive for several years.

In 1999, Brian Kelly was hired in the Department of Visual Arts as Assistant Professor and Area Coordinator of Printmaking. Early on, he found the Marais Press chop and learned from Allan Jones about its history. Previously, he was at Southeastern Louisiana University where he taught printmaking and oversaw service-learning printmaking projects that quickly became synonymous with the Marais Press. The first artist Kelly invited to collaborate with his students was Kimberly Paul Arp, his graduate school mentor at Louisiana State University. After a short while, Kelly used proceeds from successful Marais Press print sales to fully endow the Pat Terry/Marais Press Visual Arts Endowed Scholarship.

The Marais Press continues to operate successfully and functions as a bellwether for collaboration in the printmaking community nationally, but particularly in Louisiana. The establishment of the annual faculty-led symposium, This Print Thing We Are Doing: An Undergraduate Symposium in 2013 is a prime example of how the spirit of the Marais Press helped create a collaborative educational community. Co-founded by Brian Kelly, the symposium is hosted by a different university art department in Louisiana each year. The 2016 formation of the UL Print Club, a student-run organization emphasizing educational demonstrations and partnerships further illustrates the influence of the Marais Press.

Dozens of students’ careers have been impacted by the Marais Press. It has served as a vehicle for mentorship that balances academic excellence with learning by doing. Kelly and his students have worked with a variety of commercial clients including the Contemporary Arts Center New Orleans and Dusti Bongé Foundation. In addition to working in an apprenticeship mode with visiting artists, students have worked on countless Marais Press exhibitions and projects throughout the United States, Australia, and Canada as well as in the production of other printed editions that have been exhibited throughout the United States, Ireland, Poland, Canada, Japan, and South Korea. One particularly notable curatorial project Kelly undertook with his students was Bring on The Top Hats: The Works of David F. Driesbach at Contemporary Arts Center New Orleans in partnership with the Southern Graphics Council International.

The staggering advances in printing and imaging technology since the founding of the Marais Press in 1991 has irrevocably changed the nature of printmaking, requiring fine art and commercial printers alike to be students of the history of printing as well as innovators in order to meet the needs of artists and clients. Because of the emphasis on education and experimentation in academia, it comes as no surprise that a university campus is one of the places innovations in printmaking and communities of print spring up as proving grounds for young artists. For example, the service-learning model of the Marais Press also exists at the Island Press at Washington University in St. Louis and the Rutgers Print Collaborative in New Jersey. Tamarind Institute in New Mexico and Tandem Press at the University of Wisconsin, Madison work with similar models, but are institutions that exist outside the art departments at their respective universities. The differences between these types of presses are minimal and illustrate how variation is substantial within the field, even at some of the most respected presses. These institutions represent only a small part of the highly interconnected printmaking community in the United States, but they are indicative of widespread excellence. Twenty Years of Marais Press is an early foray into the scholarship of the structure and customs of this under-documented community, and the Hilliard Art Museum is honored to present this as a contribution to the art historical narrative.